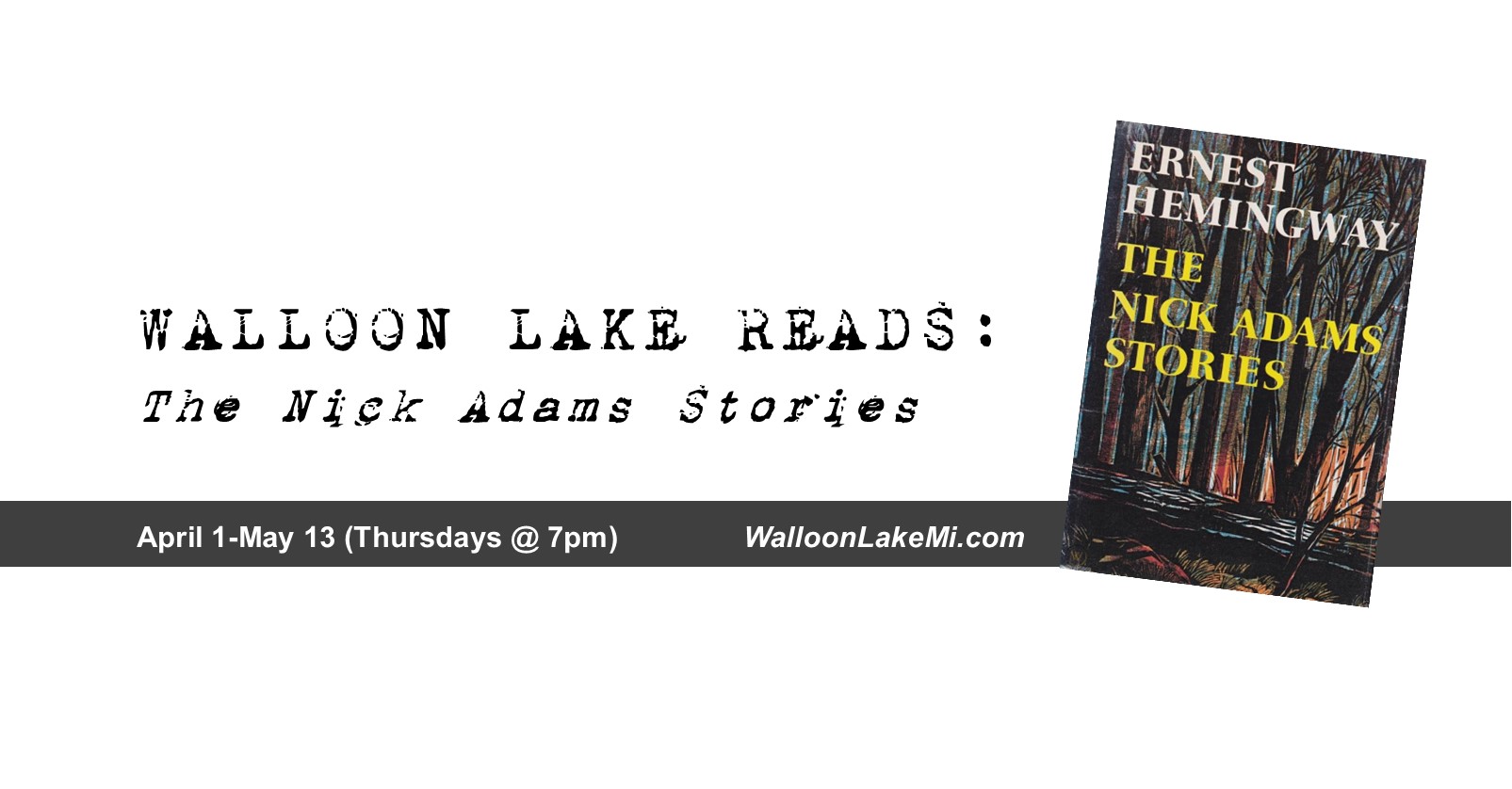 As part of its year-long HEMINGWAY HOMECOMING celebration, the Village of Walloon Lake is hosting Walloon Lake Reads: The Nick Adams Stories which kicks off on Thursday, April 1 and runs through mid-May, culminating with a finale tour of area sites featured in the stories.

“Our inspiration for this community literary event was the 2008 Great Michigan Read of The Nick Adams Stories, which was organized by the Michigan Humanities Council,” says Dianna Stampfler, who is helping coordinate many of the 2021 events focused on Ernest Hemingway in Walloon Lake. “While many have read this book or the individual stories over the years, there are still those who have no idea how Nick Adams and ultimately Ernest Hemingway were influenced by the woods and waters in and around Walloon Lake.”

Chris Struble, president of the Michigan Hemingway Society and founder of Petoskey Yesterday, will kick off the 7-week virtual Zoom series with a look inside the Hemingway family and their summers spent along Walloon Lake. He will also share some of the background about how The Nick Adams Stories came to be, where they were written and the significance of having them published in chronological order and released posthumously on April 17, 1972.

A viewing of the WCMU 30-minute special Ernest Hemingway: Life is Michigan and introduction of the upcoming Ken Burns Hemingway documentary (airing April 5-7 on PBS and featuring the voice of Michigan and CMU’s own Jeff Daniels as Hemingway) will also be featured during that opening event. The five weeks following will include virtual discussions on the individual sections of The Nick Adams Stories, moderated by educators, historians and others well-versed in Hemingway’s work, including:

A finale event will be held mid-May which likely will include a driving tour to sites around Walloon Lake and Horton Bay featured in The Nick Adams Stories, lead by Struble. If a public event cannot be hosted, a virtual tour will be offered. Copies of The Nick Adams Stories are available at most local libraries and bookstores, including McLean & Eakin in downtown Petoskey. Other events this year as part of the Hemingway Homecoming include:

ADVANCED REGISTRATION IS REQUIRED FOR THIS VIRTUAL ZOOM SERIES

All events are held on Thursday evenings beginning at 7pm ALL SESSIONS ARE RECORDED AND WILL BE POSTED ON THE VILLAGE ZOOM ACCOUNT.

STUDY GUIDE: Walloon Lake Reads (Section 2 On His Own) 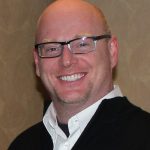 Chris Struble — President of the Michigan Hemingway Society and Owner of Petoskey Yesterday – a local company specializing in tours of Hemingway Haunts, Prohibition, Ghosts and Paranormal locales along with other facets of Northern Michigan’s rich and diverse history. He is also the owner / designer at Arlington Jewelers in Petoskey, an avid outdoorsman and photographer with a lifelong passion for history and travel. MichiganHemingwaySociety.com |  www.PetoskeyYesterday.com 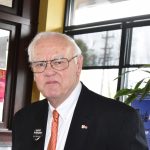 Don Daiker — Professor Emeritus of English at Miami University in Oxford, Ohio, has published essays on Hemingway in The Hemingway Review, The McNeese Review, the Fitzgerald-Hemingway Annual, the South Atlantic Review, the North Dakota Quarterly, MidAmerica, Middle West Review, and Texas Studies in Literature and Language. He is co-editor and contributor to Hemingway’s Combat Zones: War, Family, Self (2019).  He serves on the Editorial Board of The Hemingway Review. He sometimes thinks that he is Jake Barnes. https://miamioh.edu/cas/academics/departments/english/about/faculty_staff/retired-faculty/daiker-don/index.html 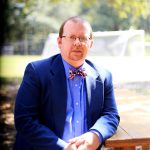 Sean C. Hadley — Teacher, a lecturer, and an author. His essays and book reviews have been published by FORMA Journal, An Unexpected Journal, and The Hemingway Review. Since 2009, Sean has taught humane letters, and for the last ten years he has directed the Thesis program at two different schools. Sean has been a speaker at the Association of Classical Christian Schools annual conference and he has presented at other venues as well, such as Faulkner University’s Institute of Faith and the Academy annual conference and the annual American Literature Association Since 2014, Sean has taught at Trinitas Christian School located in Pensacola, Florida. https://faulkner.academia.edu/SeanCHadley/CurriculumVitae 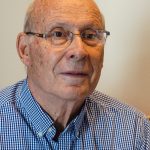 Peter Hays — Author & Professor Emeritus of English – University of California in Davis, California. He has served on The Hemingway Society and Foundation Board and is the author or editor of six books on Hemingway as well as numerous articles – the most recent books being Fifty Years of Hemingway Criticism, and Reading The Old Man and the Sea with Bickford Sylvester and Larry Grimes. https://english.ucdavis.edu/people/plhays 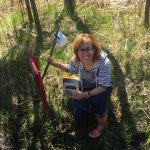 Jennifer Tianen (McQuillan) — English teacher and founder of the Literary Garden at West Bloomfield High School in West Bloomfield, Michigan. The Literary Garden houses plants from American authors’ homes and works to provide a multi-sensory setting for student learning (including “the close-growing mint” in “Summer People” (section 4, The Nick Adams Stories). Her research and writing has appeared in The Dictionary of Literary Biography, Green Teacher, The Oakland Journal, Proteus: A Journal of Ideas, and The Literary Encyclopedia. Tianen is the secretary of the Michigan Hemingway Society and is the editor of the Marge Bump Letters Project. Hemingway’s mint is a student favorite in the Literary Garden. www.literarygarden.org (or on Instagram or Twitter @wbhslitgarden) 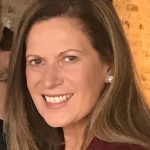 Katherine Palmer — Adjunct Instructor of English at North Central Michigan College and English Teacher at Boyne City High School has taught literature, creative writing, and composition for over 15 years. Her article, “In Their Time: Making Hemingway Relevant to the 21stCentury Student” was presented at the 2016 International Hemingway Conference in Oak Park, Illinois. She has also presented at and moderated panels on Hemingway at the Society for the Study of Midwestern Literature and taught a class on the “Summer Education of Ernest Hemingway” at the Bay View Chautauqua.

In anticipation of this series, and to explore Hemingway’s deep ties to Northern Michigan along with how they influenced his attitudes, passions and writings, WCMU Public Media is partnering with the Clarke Historical Library and noted Hemingway historian Michael Federspiel for “Hemingway in Michigan: A Live Streaming Event” Wednesday, March 31 at 6 p.m. For more: https://promotemichigan.com/wcmu-public-media-to-showcase-hemingway-in-michigan-a-live-streaming-event-as-kickoff-to-ken-burns-documentary-hemingway

Birding Around the Walloon Lake Area