Did you know that maple sugaring is the oldest agricultural activity in Michigan (and the United States)? Each year more than 90,000 gallons (3.6 million gallons) of clear sap is collected from around the state and boiled down into sweet maple syrup.

In the spring, as the days get longer and the temperatures rise (thanks to more minutes and hours of sunshine), Michigan’s sugar maple trees begin to release “liquid gold” – the clear sap which is boiled down into sweet and delicious maple syrup. The process dates back to the early Native Americans, before Michigan ever became a state. 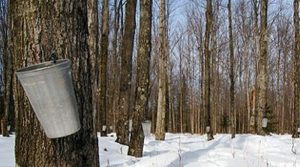 Today, Michigan ranks #5 in the nation for maple syrup production, with an economic impact of nearly $2.5 million annually. On average, Michigan produces about 90,000 gallons of syrup per year (it takes 40 gallons of sap to make one gallon of syrup, meaning more than 3.6 million gallons of sap is harvested). Maple sugaring also contributes to the overall $104 billion agricultural and $22 billion tourism industries here in Pure Michigan (see page 3 for additional facts).

Due to its high sugar content of approximately two percent, sugar maple is the preferred tree for tapping, although black maple, red maple, silver maple and ash leafed maple — each with a sugar content of about one percent — can also be tapped to produce syrup. Sugar maple is Michigan’s most common tree species and the northern hardwood forests in which they grow in abundance covers about five million acres. And while some Canadian provinces and New England state area are often recognized as leaders in the maple sugaring industry, Michigan itself has more than three times the number of sugar maples than Quebec or Vermont, meaning the potential for growth is unlimited. Currently, Michigan utilizes less than one percent of its potential maple resources. 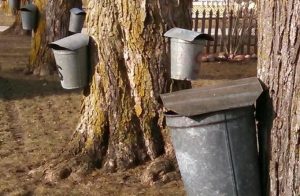 As with any agricultural crop, sap changes from farm to farm and region to region, depending on the soil content. The area’s climate and species of trees also play a role in this industry, meaning syrup flavor profiles change from region to region, even within the same state.

Of course, there’s more than just syrup to be enjoyed. Producers of maple syrup are also making candy, ice cream and other sweet treats with their bounty. Even Michigan wineries, breweries and distilleries are crafting beverages with maple sap or syrup for special seasonal offerings.