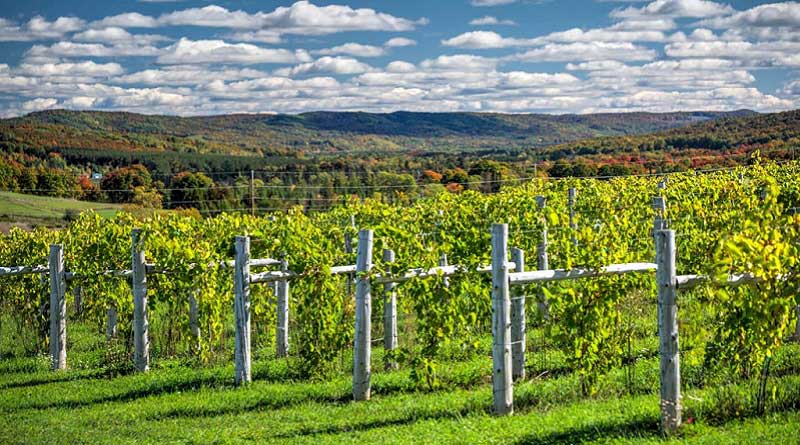 Michigan is home to nearly 150 wineries and five federally-recognized American Viticultural Areas (AVAs) – including the Tip of the Mitt, which is the largest, encompassing 2,760-square miles throughout Alpena, Antrim, Charlevoix, Cheboygan, Emmet and Presque Isle counties in the northern Lower Peninsula.

Established in August 2016, the Tip of the Mitt is the newest AVA in Michigan. This region is home to 14 agricultural destinations collectively known as the Petoskey Wine Region.

The Tip of the Mitt AVA was created by the U.S. Alcohol and Tobacco Tax and Trade Bureau by petition from the Straits Area Grape Growers Association. The petition to create the AVA noted that the area was suited for the cultivation of cold-weather varietals such as Marechal Foch and Leon Millot.

Located further north than any of the other AVA’s, the Tip of the Mitt region offers a unique set of challenges and opportunities when it comes to growing grapes. Lake effective conditions from Little Traverse Bay and the Straits of Mackinac often create colder and windier winter seasons, meaning varietals typically planted downstate can’t withstand the harsh conditions. Hybrid varietals—such as Marquette, Frontenac, Lemberger, Traminette, Vignoles and a dozen others—represent new standards in cold, hardy viticulture and enology.

An American Viticultural Area (AVA) is a designated wine grape-growing region in the United States distinguishable by geographic features, with boundaries defined by the Alcohol and Tobacco Tax and Trade Bureau (TTB) of the United States Department of the Treasury. As of November 2016, there were 238 recognized AVAs in the United States—several of which are shared by two or more states.

Current regulations impose the following additional requirements on an AVA.

Once an AVA is established, at least 85% of the grapes used to make a wine must be grown in the specified area if an AVA is referenced on its label.

AVAs are reserved for situations where a geographically defined area has been using the name and it has come to be identified with that area.

The 14 wineries in the Petoskey Wine Region –  all within a short drive of Walloon Lake – include:

For more about Michigan’s overall wine industry, check out the 2021 edition of Michigan Wine Country magazine.

What is a “Barrel Back”?