The Story of the Legendary 17 Sailboat

There is perhaps no more beautiful image of summer than the sight of an elegant sailboat gliding through the sparkling turquoise waters of Walloon Lake. Sailing on picturesque Walloon, with its irregular shoreline and light, variable winds, is both a challenge and a delight to the knowledgeable sailor. Surrounded by steep wooded hills, the winds coming off the shores of Walloon’s many arms present unique challenges.

Over the years many sailing enthusiasts have relished that challenge, experimenting with various sailboats and racing them all over the lake. Sailing has been an integral part of the legend and lore of Walloon since the late1890’s, when summer resorter Albert Nulsen of St. Louis, determined to be one of the first to sail the lake, transported his sailboat behind a team of horses for the 650-mile trip. 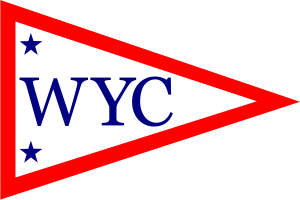 The Walloon Lake Yacht Club was organized in 1907 in a meeting at the Walloon Lake Country Club, with Nulsen as vice-commodore and noted sailor Fred Adams as commodore. Its mission was not only to promote boat racing but also to preserve the natural beauty of the shores and the purity of Walloon’s waters. The original emphasis of the club was power boats, but by 1927 the club was reorganized simply as the Walloon Yacht Club (WYC), with sailing as its major emphasis.

Sailboat racing on Walloon had taken place as early as 1909, but it was the WYC that popularized the sport. A variety of sailboats were utilized but in 1928, Bill Loughlin, one of the original members of the WYC, designed the very popular Walloon Lake One Design sailboat. Loughlin, a student of naval architecture at the University of Michigan, created a 20 feet longfin-keel sloop with a 186 square feet sail, appropriately called the Walloon Lake One Design, or “W,” which enjoyed tremendous popularity.

But Bill Loughlin wasn’t done yet… 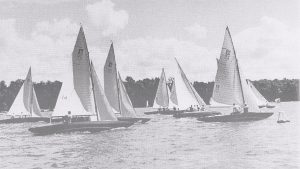 Just six years later, he embarked on a new phase, lengthening the “W” boat to 25 feet and designing a 17square meter sail to accompany it. Loughlin and young Henry Cawthra, who would go on to become one of the most accomplished sailors on Walloon, built the first 17 Square Meter in the bitterly cold winter and spring of 1934. After each piece of the new design was cut and fitted, a pattern was made to facilitate the building of additional boats.

It was Henry Cawthra, a world class sailor, who best described the building of the first 17, a painstaking, sometime tedious job, in his very interesting treatise A Short History of Sailboat Racing on Walloon Lake, Michigan. As he describes it, oak for framing and red cedar for planking were purchased at local lumber yards, while white cedar for deck planking was harvested from local trees. Sitka spruce was used for spars. The fittings, mostly aluminum, and the iron keels were cast at East Jordan Ironworks. Much of the machining was done by hand. The curved wooden mast of the 17 rose nearly 30 feet above the water. Although there were many advantages to the design of the original “W” boats, the beautiful new 17 was undoubtedly better constructed. In fact, the first 17, Number 1, still sails on the lake after 88 years. 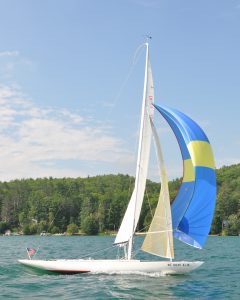 After four successful years, Loughlin sold the business to a talented young man named Ted McCutcheon, who would become one of northern Michigan’s most notable boat builders. McCutcheon, who built many 17s, operated his boat works at various places around Walloon, including a quonset hut in the Village, then later in Charlevoix.

As sailing became even more popular around the lake, other sailboats were introduced, including the Snipe, Sunfish and Highlanders. Races were held in the various classifications of sailboats on Walloon, as well as with neighboring yacht clubs from Charlevoix, Harbor Springs, Burt Lake and Crooked Lake. In 1978 the WYC hosted the Highlander National Championship on Walloon. The Snipe, Sunfish and Highlanders remain popular, but it is the 17 that has captured the hearts of many Wallooners.

Sally Randall Swanson is one of those Wallooners who are passionate about the 17s and sailing in general. “From the moment I set foot in a Snipe I was hooked on sailing. The winds could take me anywhere I wanted to go,” she comments. Intent on buying a 17, it was Sally who, noticing the deterioration of the wood on so many of the boats, came up with the idea to create a 17 in fiberglass — a radical notion, indeed. But McCutcheon. who knew how labor intensive and incredibly expensive it was to build a wooden 17, agreed. 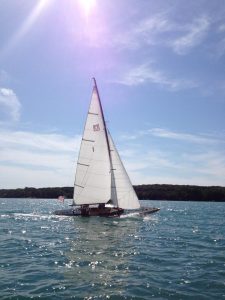 In 1970 Sally and her husband Bill Odom successfully petitioned the WYC for permission to build a fiberglass version, and joined with Betty and Stuart Gould to form Seventeens, Inc. Ted McCutcheon was commissioned to build the first fiberglass 17, which is now owned by Sally Swanson’s daughter Deb Odom Stern. Later Harvey Schach bought the Goulds’ share of the company and commissioned additional 17s from an Ohio boat company. Harvey Schach went on to build the fiberglass models in various series through Number 42.

While a variety of sailboats can still be found on Walloon today, it is the celebrated 17 that captures people’s imagination. What makes the 17 so special? “It’s well suited for the light winds we have on Walloon, but wouldn’t work well on the big lakes,” notes WYC Past Commodore Bill Bray. “It’s interesting that while the hull design is 90 years old, our sails are very modern, state of the art. It’s truly a combination of different technologies.” Some of the unique attributes of the 17 include a low beam-to-length ratio and a large sail area to displacement, making a very tender boat suited to light winds. The 17 class insignia is a 17 in a square signifying a square meter, similar to the 12 meters used for America’s Cups for decades, which have a 12 over a line.” 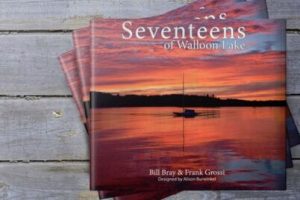 Today approximately thirty-one 17s remain in existence. One of them, Number 10, is no longer a functioning sailboat but instead serves as the iconic marker to the entrance to the Village of Walloon. The mission of the WYC remains the promotion of sailing in all forms, while fostering friendship and good sportsmanship and maintaining the pristine beauty of the lake. An extensive schedule of races is held each year from mid-June to mid-August, culminating with the Commodore’s Cup and awards party. Another excellent non-profit organization, the Walloon Sailors, Inc. (WSI) was established in 1995 to promote the art of sailing. The WSI provides an extensive program of sailing lessons for both children and adults.

Now, nearly 90 years after some gifted young men with a dream created the perfect sloop for Walloon, the breathtaking view of graceful 17s racing down the lake, spinnakers flying, is still one of the most magical sights on Walloon.