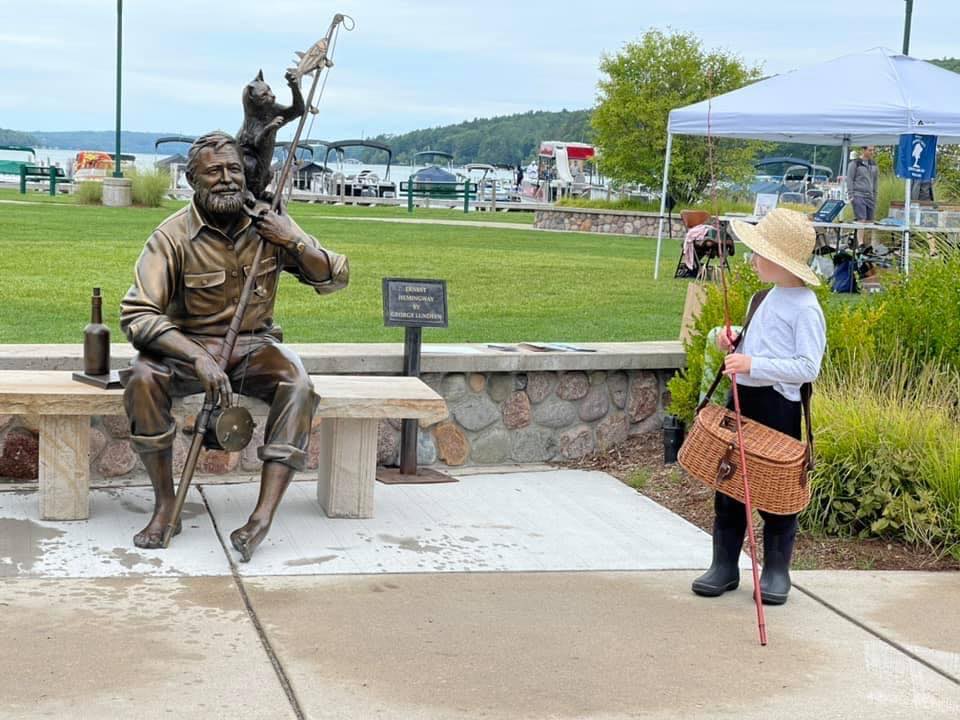 An impressionable trip to Cuba some 40 years ago by two artist friends sparked an interest in one of the world’s most recognizable twentieth century writers and ultimately led to the creation of a bronze sculpture which has found a new northern Michigan home.

Sculptor George Lundeen – a native of Nebraska and now a resident of Loveland, Colorado – met gallery owner Deane Knox four decades ago in Denver. They often traveled the world together and sailed into Havana in the dark of night to avoid detection. They spent weeks there teaching at the University of Havana and exploring Hemingway haunts including the Finca Vigía in San Francisco de Paula Ward – where Ernest lived from 1930 until 1960 with his third wife, Martha Gellhorn, and later, his fourth wife, Mary Welsh. It was during that trip that the idea first originated for a Hemingway piece of art.

“The original idea as a bust,” says Lundeen, “but Hemingway deserved more than just a bust.”

It would be years later before the idea resurfaced, after many more globetrotting trips. By then, Lundeen was a well-established sculptor and Knox owned a handful of galleries – including one in Harbor Springs, Michigan (now since closed). At one point, Knox revisited the idea saying how a bronze sculpture of Hemingway would be a wonderful addition to his northern Michigan gallery.

And, so Lundeen got to work reading, researching, sketching and envisioning the finished product.

“I read Hemingway as a kid and I reread him as an adult and realized what an incredible writer he is,” Lundeen recalls. Drawing inspiration from The Old Man and the Sea – one of Hemingway’s most noted works and the one for which he received both the Pulitzer and Nobel Prize (in 1953 and 1954, respectively) – Lundeen dug deep into the author’s past including his love of fishing, drinking and polydactyl (six-toed) cats which are all depicted in the sculpture.

“When you do an historical figure, you really have to make sure it is right,” says Lundeen. “We found a man in Florida who has Hemingway’s original reel and he let me photograph it so that I could get it right on point. I also put a smile on his face, because if he is surrounded by the things he loves I imagine he is pretty happy.”

“‘The Old Man and the Cat’ was one of Deane’s most prized possessions,” says Allison Baker, who managed Knox Gallery in Harbor Springs. “When George was first working on this piece, Deane traveled to the foundry in Colorado specifically to check out the progress. He saw the sculpture in clay before it was even cast and he made sure that he had one of the first editions when the lift size version was finished.”

There are just 21 of these sculptures in the world, and #5 sat outside of Knox Gallery for years (where it was constantly the subject of photographs and selfies) – before finding a new home this weekend in downtown Walloon Lake. The project, spearheaded by the Melrose Township Downtown Development Authority, is the highlight of a year-long “Hemingway Homecoming” celebration that has taken place throughout 2021.

This bronze sculpture sits very near the place where Ernest was first introduced to this picturesque community (and lake) in the fall of 1899. He was just three months old that year when he came with his parents, Grace (Hall) and Clarence Hemingway, and his older sister, Marcelline, traveling from Chicago via steamer to Harbor Springs, then several trains into Walloon Lake before taking another smaller steam launch to their newly built cottage, Windemere, on the lake’s North Shore.

Walloon Lake would become a favorite place to Hemingway, who visited every summer until his 1921 wedding to Hadley Richardson in nearby Horton Bay. The newlyweds spent their honeymoon at Windemere before returning to Chicago and ultimately relocating to Paris in December of that year. He would never return to his beloved Walloon Lake – saying it was so perfect in his memory that he never wanted to taint or change that image. And while he (like Knox and Lundeen) traveled the world experiencing a multitude of cultural experiences, he always held Walloon Lake close to his heart.

“A lot of work and dedication went into making Walloon Village the permanent home for ‘The Old Man and the Cat’ to be enjoyed for generations,” Baker says. Deane wanted his original [Hemingway] to stay in northern Michigan so we made it happen.”

In addition to this new bronze sculpture, the village of Walloon Lake will install a series of historical signs this fall in Circle Park which will tell the full story of the area’s rich history from trains to boats to resorts and of course, the Hemingways – who have become the lake’s most famous summer residents. The Michigan Hemingway Society is also adding downtown Walloon Lake to its self-guided “Michigan Hemingway Tour” and will install a bronze plaque this fall as well.

If you stop to see “The Old Man and the Cat” please share your photographs (and selfies) online with the hashtag #HemingwayInWalloon so that we can see them! And be sure to let us know where you’re visiting from…as we hope our Hemingway will draw visitors from around the world!

Footnote: In addition to “The Old Man and the Cat” there are several other George Lundeen sculptures open for public viewing in Michigan including three in Holland and two in Ludington.