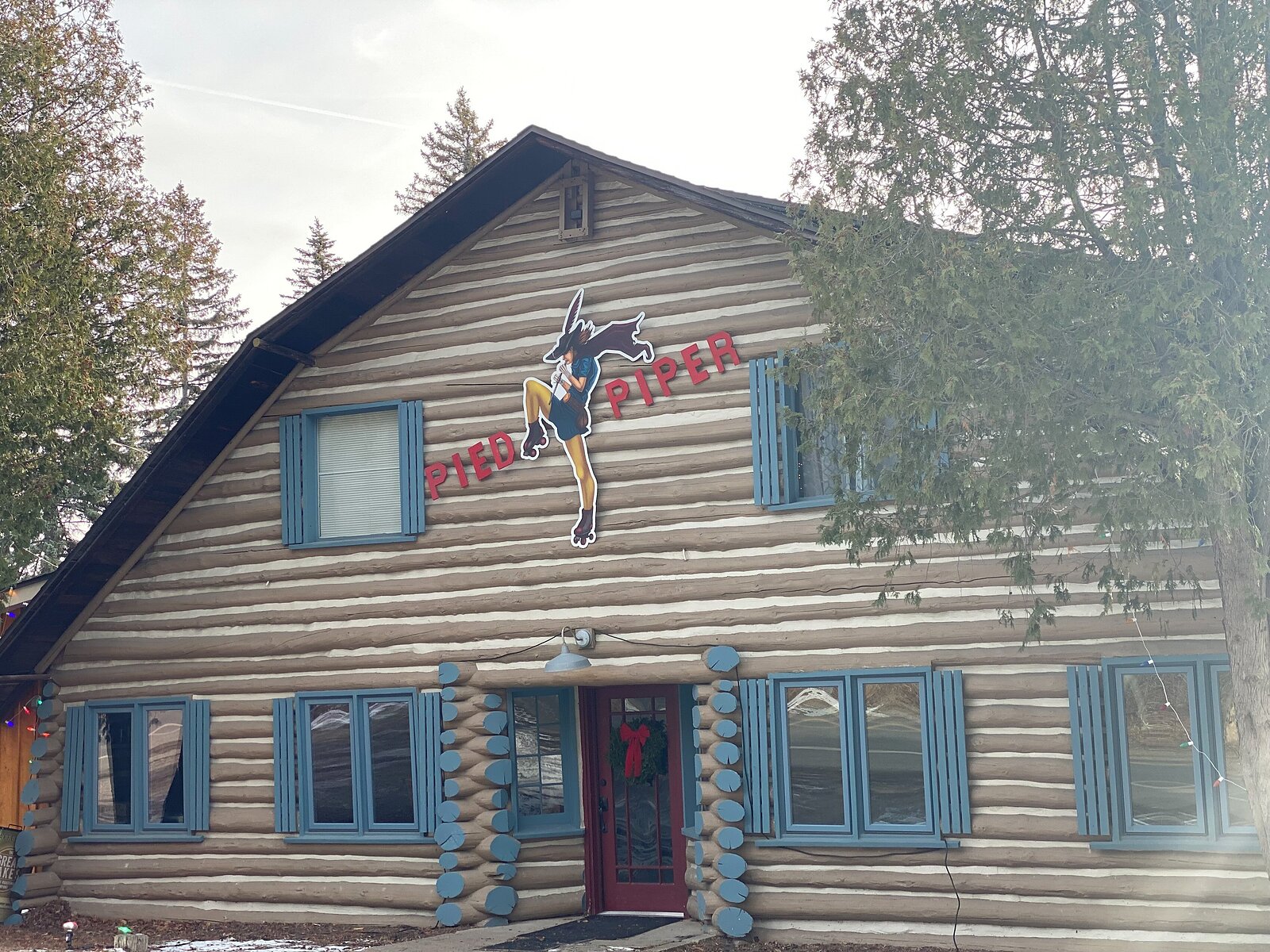 Just off US-131 on M-75 headed into downtown Walloon Lake sits a large gambrel barn style structure that has been entertaining families for generations. While there have been years when the building sadly sat vacant, it has remained an iconic part of the village’s history while waiting patiently for its next chapter. Last month, after months of renovations by owner and developer John Parent, the space has reopened as the Junction Event Space.

In the mid-1930s, Ray and Addie March built a large log cabin style ballroom near the southwest intersection of present-day M-75 and US-131 in Melrose Township, calling it The March Inn Dance Pavilion. At the time, Ray was working for his father-in-law, Ben Ellis, a prominent developer and builder who in 1904 constructed the Indian Garden Hotel on Walloon Lake. 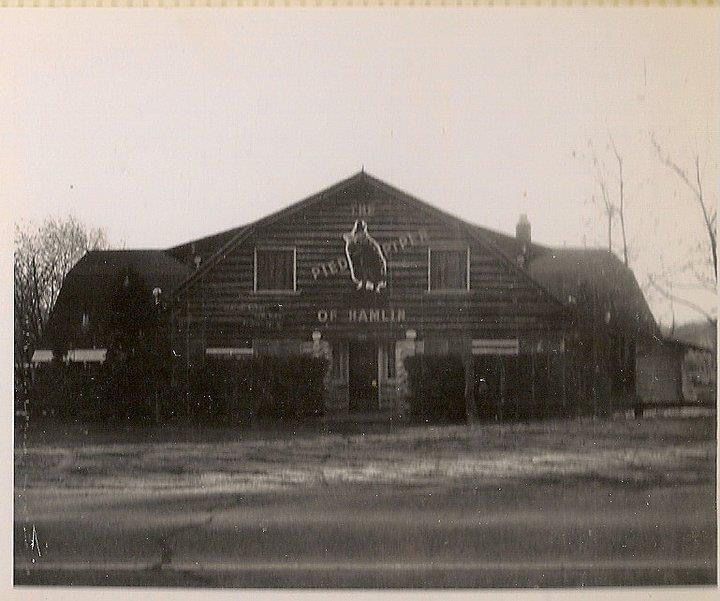 It is said that logs used to build the dance hall came from property near the Indian Garden – a parcel covered at the time with primitive forest – and was hauled by horse-drawn sleigh across the frozen lake. The 50-foot-long clear span logs used for the roof trusses were reportedly transported 30 miles by truck through downtown Petoskey from the virgin pine forest of Indian River.

According to a July 11, 1935 article in the Emmet County Graphic, the wood for the building’s floor came from Michigan Maple Block Co. (which operated in Petoskey from 1881 to 2020) where two men and a boy “laid and sanded 3,000 square feet of dance surface in 14 hours” using “5,500 blocks, each 9 by 9 inches square, [that] were laid in mastic, without nails, and fitted with springs to take up expansion and contraction due to weather and pressure conditions.”

When The March Inn Dance Pavilion opened it was billed as “the finest floor in the largest rustic building in Northern Michigan.” Operating during the Great Depression and heading soon into World War II meant challenges for the Marches, but they remained steadfast and over time expanded their business portfolio to include the Marches Lodge on the east side of US-131.

As the Big Band era faded away, Ray and Addie – along with their teenage daughter, Marcelyn – looked for ways to keep the pavilion open. They began offering indoor roller skating, with exhibitions and competitions that drew crowds from throughout the region. Marcelyn herself became quite a skating queen during those years. For her 18th birthday, the Marches gifted the rink to their daughter who ran it with her husband, Harold Hamlin, under the name The Pied Piper of Hamlin, until her passing in 1990.

Al and Judy Reeves, who had purchased the Junction Inn restaurant next door in the mid-1970s, acquired the skatery next. For a brief period during their tenure (2007-2010), the building was known as The Rustic Ballroom and was the home of the Up North Big Band – which hosted dances twice a month with help from the Blissfest Music Organization, under the direction of band leader Karl Gilewicz. Once again, the sounds of Benny Goodman, Glenn Miller, Tommy Dorsey and Duke Ellington wafted through the iconic wooden building as dancers swung the night away.

In December 2011, Angie and Jeff Marshall purchased both businesses and began the daunting, multi-year task of renovating them. They hosted a grand opening of the 6,500-square-foot Pied Piper Skatery on August 16, 2014 (the new Walloon Junction restaurant opened in October 2016). These ventures were short lived, and the Marshalls hung up the skates for good on November 11, 2017 (the restaurant stayed open for a couple years past that).

In the summer of 2020, John Parent purchased the two strategically placed commercial buildings in Melrose Township including the 2,300-square-foot Walloon Junction (04472 N M-75 at US-131) along with the abandoned March Inn/Pied Piper/Rustic Ballroom (04454 M-75).

As a child, Parent (originally from Bloomfield) visited the Walloon Lake area for winter snowmobiling trips with his family. In 1996, he met his future wife, Kristin, whose family had been on the lake for decades. Today, John and Kristin live on the North Shore in a house that her family bought in the mid-1970s. John Parent’s background is quite diverse with careers in automotive sales, manufacturing LCDs, automotive software, wineries (in Napa) and now restaurant and event spaces.

“I’ve driven by the Junction for more than half my life, and it was vacant for years,” Parent says of his interest in this latest business opportunity. “My college roommate, Pat Leavy [a Walloon Lake realtor] suggested I buy it to give me something to do in my ‘retirement’ in northern Michigan.”

Thanks to his efforts, the northern entrance into the Walloon Lake is looking better than ever before. Throughout 2020, Parent went to work giving the Bar & Grille – originally a log structure dating back to the late 1800s – a much-needed overhaul (inside and out). As work progressed, locals wondered how long it would be before he turned his attention to the Pied Piper building.

News broke on social media this fall that the Junction Event Center had also been renovated and was once again ready to welcome visitors. A Grand Opening – complete with live music, dancing and adult beverages – was held on Wednesday, November 23 (the night before Thanksgiving…the “biggest bar night of the year”) which attracted a crowd of around 200.

“We have done some extensive renovation to turn it back into what it was originally built for – a place for dinner, drinking and dancing,” says Parent. “Our plan is to host two public events each month, at least during the winter.”

Upcoming public events include a New Year’s Eve celebration, followed by music shows on January 14 (The Hood) and February 11 (Yankee Station). Other events will be posted online: www.facebook.com/WLJunction.

The Junction Event Space is also available for rent for private events like weddings, holiday parties, reunions, fundraisers, dinners and the like, by calling Walloon Junction at (231) 535-6006.

Reprinted from the December 15 issue of Rural Innovation Exchange.