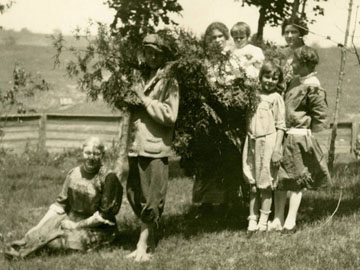 While Ernest Hemingway was born in Oak Park, Illinois on July 21, 1899 – his birthday celebrations were held each summer at the family cottage – Windemere – on Walloon Lake. He was just three months old when his parents, Grace and Clarence, brought him and his older sister, Marcelline (born on January 15, 1898) to northern Michigan in what would become an annual summer pilgrimage.

In her 1975 book Ernie, Sunny shares photographs and details about the celebration for her brother’s eleventh birthday (1910) where 36 guests dressed up in their finest and gathered at Windemere for a barbecue.

Yet, things changed dramatically by the following summer, with the arrival of sister Carol – just two days before Ernest’s twelfth birthday. A detailed account of that memorable event is featured in sister Marcelline’s 1961 memoir, At the Hemingways: A Family Portrait (pgs. 92 -95).

“The summer of 1911 at the lake was quite different from all the others. A new baby was expected, and I, who was thirteen, was old enough to be treated as a real confidante by Mother. The baby was expected in July, Mama told me, and rather than keep us all home in Oak Park in hot weather, Daddy and Mother planned that their fifth child would arrive at Walloon Lake. Long before we left for the cottage early in June, Mother talked over plans for the baby’s birth with me and explained that a trained nurse, Miss Daubey, a graduate of Daddy’s classes in obstetrics at Oak Park Hospital, would be with us at the lake, as well as our nurse and cook. Mother felt quite sure the baby would be born before the Fourth of July.

“If it was a boy, as my parents hoped, he was to be called Forrest, and in anticipation I embroidered an Old English F in blue silk on a baby pillow. If it was a girl, Mother told me, she would be called carol, a shortening of my Grandmother Hall’s name, Caroline.

“Mother showed me all the little baby clothes and piles of fresh new birds-eye diapers she had packed away in her room, and she let me help her fix the bassinet made of a clothes basket padded with cotton and covered in pink and white. The nurse arrived, and Daddy, who was going to perform the delivery himself, had everything in readiness. Mother had never been to a hospital in her life and insisted that she wanted this baby to be born at home just like all the others.

“The days passed, and the first week of July came and went, but there was no sign of the baby. Every morning at breakfast Daddy would look inquiringly at Mother, and Mother would shake her head as though to say, ‘Not yet.’

“We were having breakfast on July 19, when suddenly Mother said, ‘Oh, dear!’ It wasn’t the words, but the tone of voice in which she said it. There was relief and fear combined. Daddy jumped from the table.

“‘Finish your breakfast quickly, kids,’ he said, ‘and make yourselves scarce.’

“Things began to happen fast after that. Each of us children had a place to go.

“I was banished with a picnic lunch and told I could spend the day at Murphy’s Point, a quarter of a mile away. I took along a sketch pad, writing paper, and a book. Bobbie took the younger children to Bacon’s farm for the day. Ernest went fishing.

“I resented being sent off, and I said to Daddy, ‘Please let me stay. I can help the nurse or Mother.’

“‘No!’ my father said excitedly. ‘Just leave us alone. We’ll call you when the baby’s here.’

“It was one of the longest days of my life. I waded in the cool water along the shore. I collected shells. I dug for crayfish. I gathered clams – they weren’t good to eat like the salt-water clams I had eaten at Nantucket, but it was amusing to get a lot of clams together near the shore and then watch them slowly edge out along the bottom sand to deep water gain. You really could not see them move, but if you took your eyes off them for a moment a wavy trail they had made in the sand was visible, so you knew they had moved.

“The long afternoon dragged on. The sun was getting lower in the sky. I began to worry about Mother and the baby. What if something had happened to Mother? What if there wasn’t going to be a baby? I made myself wait for what I though was about an hour more. I cold hear Bacon’s cows mooing as they were being driving back for milking, so I new it was almost five o’clock. I could stand the suspense no longer. I gathered up my things and slowly walked back toward the cottage, Miss Daubey, the nurse saw me first, as I came into the yard.

“‘All right but pretty tired,’ she said.

“‘Not now. I’d let her rest awhile,’ said the nurse curtly. Not a word about the baby.

“The tension went out of me. I was happy again. My baby sister Carol was here and Mother was all right. It was a wonderful world, I thought, as I went out to the kitchen to see if the cook needed any help setting the table. I began to sing.

“Later, I saw my new sister in her pink bassinet. Carol was tiny and dark-haired, with perfect features, the most adorable little creature I had ever seen. I loved her from that moment and have never stopped feeling that way. Carol was the most beautiful member of our family.

“Ernest was very fond of Carol, too. He said she was almost his birthday present. Ernie didn’t get much of a celebration on July 21 that year. But every July from Carol’s second birthday* on they celebrated their birthdays together with a birthday tree. The day before Carol’s birthday, Dad and Ernie would cut a small pine tree in the woods nearby, and Carol would ride back to the cottage on top of it as they carried it between their shoulders like a Yule log in pictures of early English celebrations. After that, the tree was set in a homemade stand on the dining porch, all the boughs were festooned with our decorations.”

While Marcelline notes the “birthday tree” tradition began with Carol’s second birthday (1913), sister Sunny recounts in her book that it actually started in 1912 with Carol’s first birthday and the handful of pictures circulating support this timeline. It is believed the ceremony was held for several summers until Ernest graduated high school, though the only photographs seem to be from that first year.

As part of its year-long “Hemingway Homecoming” the Village of Walloon Lake – along with the Michigan Hemingway Society – is recreating this historic family tradition by placing a “Birthday Tree” downtown on the patio of the Talcott Center and people will be invited to create and hang hand-made ornaments on it. The formal dedication of “Ernie” – the village’s new Little Free Library and an ice cream social at Sweet Tooth will round out the afternoon’s activities on Wednesday, July 21 from 5-7pm. All activities are free and open to residents and visitors alike.