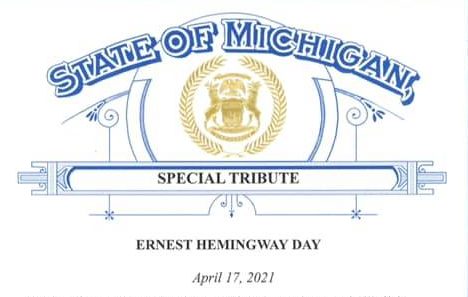 Eleven years after the death of Nobel and Pulitzer Prize winning author Ernest Hemingway, a collection of sketches known as The Nick Adams Stories was released by Charles Scribner’s & Sons. The date was April 17, 1972. To commemorate that date – and the author’s ties to northern Michigan – the Village of Walloon Lake and Michigan Hemingway Society requested that this date be named “Ernest Hemingway Day” in Michigan by Governor Whitmer.

WHEREAS, Clarence and Grace (Hall) Hemingway established their summer presence in 1899 with the purchase of 350-feet of frontage on Walloon Lake and the subsequent building of their cottage, Windemere, still owned by descendants of the family; and,

WHEREAS, Ernest Hemingway – the second oldest of six children – spent at least some time every summer for 22 years, from the year of his birth in 1899 until 1921, hunting, fishing, boating, swimming, working and enjoying all that northern Michigan has to offer; and,

WHEREAS, as a budding writer Ernest drew inspiration from those outdoor experiences, locales and residents of his youth to later create the character Nick Adams, publishing many of the short stories independently and in compilations as early as 1925, with the posthumously publication of the complete collection (in chronological order) of The Nick Adams Stories by Charles Scribner’s & Sons on April 17, 1972 for $7.95 per copy; and,

WHEREAS, one hundred years ago this year – on September 3, 1921 – Ernest married Elizabeth Hadley Richardson in a quiet service at the Horton Bay Methodist Church followed by a chicken dinner reception at Pinehurst Inn and culminating with their honeymoon at Windemere as reflected in the short story “Wedding Day” in The Nick Adams Stories; and,

WHEREAS, the Village of Walloon Lake – as part of its year-long “Hemingway Homecoming” celebration – has coordinated a community program entitled Walloon Lake Reads: The Nick Adams Stories (replicating the 2007-2008 Michigan Humanities Council’s Great Michigan Read) to take place April 1 through May 13; and,

WHEREAS, the Michigan Hemingway Society and the Village of Walloon Lake remain dedicated to highlighting and remembering Ernest Hemingway’s ambassadorship to this region of northern Michigan, even 100 years after his last extended stay in the area.